The Story of Chai

The Story of Chai

Chai comes from the Hindi word meaning “tea”. Between 5000 and 9000 years ago it is said that the reigning king created the recipe as a healing Ayurvedic beverage. He carefully selected each ingredient based on their known benefits defined in classic Ayurveda:

Between regions, the recipes varied, and it was served both hot and cold as a remedy for minor ailments. Traditional chai spices mixed with black tea include cinnamon, star anise, cardamom, cloves, fennel, ginger and peppercorn. Throughout the years, Chai has been prepared in a diverse range of ways and contained an equally diverse array of spices. Some people like a mix of cardamom and ginger, others include cinnamon and star anise and don’t forget the sugar.

Chai’s popularity surged in the 1960s when mechanised tea production CTC (cut, tear, curl) was introduced. CTC produces an inexpensive tea that infuses quickly and has a strong flavour, making it

the perfect accompaniment to the sweet spiciness of chai. Ultimately the popularity of Masala Chai gained momentum becoming deeply ingrained in Indian culture and lifestyle.

Today Masala Chai tea stalls are a common sight throughout India, from small roadside stops to larger city establishments – all with their own Chai Blend. Our Zealong’s Own Chai is a harmonious blend of whole green cardamom, whole black peppercorns, broken cinnamon bark, ginger root and whole cloves. This is a spicy chai blend. The spice mix and our Zealong Black tea combine to honour the exotic flavours of traditional chai vendors. No sugar needed and just brew extra strong if you want to add milk. Zealong’s Own Chai is great hot or cold, we have some brewing ideas below.

Add 4 teabags of Zealong’s Own Chai to 1.5 litres of ginger beer (or ale), leave to brew in the fridge overnight.
Serve over ice with a vanilla pod

Add 4 teabags of Zealong’s Own Chai to 1.5 litres of lemonade, leave to brew in the fridge overnight.
Serve over ice with a slice of lemon.

Brew 2 tea bags or 5 g of loose leaf of Zealong’s Own Chai with 200ml of boiling water infuse for 5 minutes.
Heat sweetened condensed milk to near-boiling.
Mix half the tea brew with the heated condensed milk, enjoy. 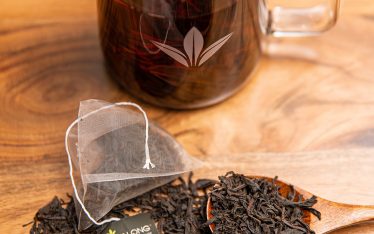 Reduce, reuse, reinfuse: Why what’s in your tea bag matters
It’s morning break: if you’re a tea drinker, you might take that moment to quickly dunk a tea bag into mug of hot water, perhaps with a splash of milk....
0